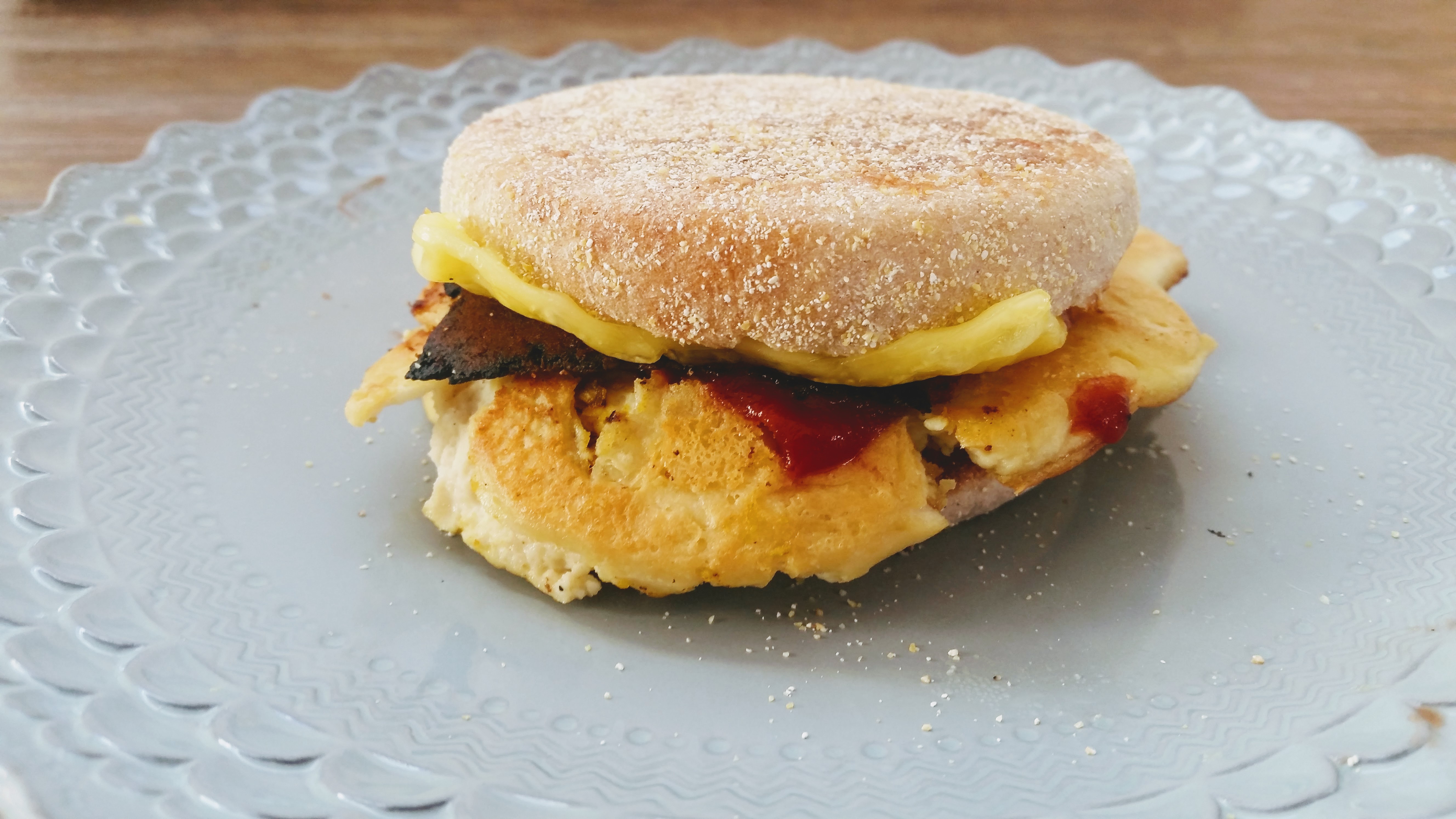 A friend challenged me the other week, “veganize the breakfast sandwich.”

Eggs. Cheese. Bacon. They said it couldn’t be done.

But we vegans are not to be deterred, are we?

For the non-vegan out there who wonder, “what does a vegan breakfast look like,” we are going to have something to SHOW them!

How To Veganize: Brainstorming

First off – I love simple vegan eating. As we’ve discussed in other posts, meals need not be complicated. (see: How To Cook Without A Recipe – 3 Ingredient Dinner, The Pasta, & The Bowl)

I love a good vegan challenge. After nearly 10 years of eating vegan, I know my vegan resources for creating “imitation” meals.

This was going to be fun. Let’s break it down. Bear with me. I’m going to talk about egg and cheese sandwiches from my perspective when I ate things like that (almost 10 years ago…). My strong stances remain and will now be applied to the vegan version.

Some people are flexible about how they take their egg and cheese. They might put it on an english muffin, a bagel… heck, even plain old toast!

The fact is, there is only one way to eat an egg and cheese sandwich and that is on an english muffin.

I grew up with Tomas’s english muffins. Alas, these are not vegan because they contain milk. (I doubt the muffins you get from NYC food carts are vegan either.)

Of course, if you’re a badass (and not hungover), you could make your own. I’ve made Isa Chandra Moskowitz’s before and they were indeed yum! They’re in her book Vegan Brunch.

No, veganizing the cheese is not as easy as veganizing the english muffin. Except that it sort of is because you are just going to buy the packaged version of vegan cheese.

I’m not going to take you through making your own delicious homemade vegan cheese here. That is decidedly NOT what an egg and cheese sandwich is. This is a sandwich for the lazy and the hungry, not the ambitious.

I can’t say I have much expertise in this area because I typically don’t buy packaged vegan cheeses. I ended up using Follow Your Heart Provolone only because that’s what my local store had.

This cheese worked out well in the sense that it melted. However, it didn’t have a strong enough flavor for a breakfast sandwich. That’s probably because it was in the flavor of provolone. Maybe cheddar would have been better?

Here are some other brands you can experiment with: Daiya, Go Veggie Foods (warning: they have a non-vegan lactose-free cheese, so check the label) and Field Roast.

If you want a homemade option, I would recommend making a cashew sauce. Or you could buy a vegan cheese book and really start experimenting.

If you are a person who enjoys some bacon on your egg and cheese, you have vegan options.

In the spirit of laziness, I went with packaged stuff for this sandwich. I used Sweet Earth’s Hickory and Sage Benevolent Bacon and really liked it. Some other options are: Tofurky Tempeh Bacon and Upton Naturals Seitan Bacon.

For those of you who want to make up your own vegan bacon, you can use tempeh or coconut to make some bacon. (I’m sure those foods were never uttered in the same sentence before.) I won’t go into detail here but – Tempeh is a good bacon sub because it’s so hearty. Add liquid smoke and you are good to go! I learned about baconizing coconut from Terry Hope Romero (along with a billion other vegan tips). Try it out! And finally, we arrive at the heart of the sandwich.

I have made a Tofu Benedict before. It relied on marinated tofu cut into a circle. It worked well but this is not what I was going for here.

This needed to be a greasy, fried, thinner deal. We needed an omelet situation but made from a vegan source.

I still turned to tofu but this time I mixed it up. Literally.

Using pureed silken tofu was perfect for the eggy texture and I knew that I needed to add wonder salt kala namak to get that eggy flavor. Kala namak is a sulfurous salt and it does the trick.

I realized that Isa Chandra Moskowitz had an omelet recipe in her Vegan Brunch cookbook so I relied heavily on that for the white part of the egg, adjusting the proportions a bit.

I also decided to add in a vegan yolk because I thought it would be cute. And, frankly, it really was.

Unlike your typical yolk, I aimed to get the right texture prior to cooking. I didn’t attempt to create a yolk texture that was gooey precooked and then transformed to hard while it cooked. So, chickpeas was my go-to here.

Of course, you can skip the yolk if you want – just add more black salt to the whites so you don’t lose out on the eggy salt flavor. Also, add turmeric to the whites for the eggy color, which is what I added to the chickpeas.

Is this not the most nostalgic frying you’ve ever seen?

Look at that adorable vegan egg!

If you don’t have a non-stick pan or a really well-seasoned pan, you are going to have to use a bunch of oil. For this reason, I omitted oil from the egg whites ingredients.

I spooned the tofu mixture into the pan to the size of “egg” I wanted and then dented in the middle a bit to place the “yolk”. The mixture sticks together really well and maintains its shape so you can make it as thick or thin as you like.

Everything else comes together easily while the tofu is cooking. I can’t believe how satisfying it was to have this sandwich. Now I just need a cart around the corner that makes them for me!

I really love having this breakfast treat in my toolkit. Now I know that I can make up a batch of egg whites and yolks super easily and have a yummy, indulgent brunch.

If you’ve eaten vegan for a while or are just feeling like you want to take a walk down memory lane, whip up this scrumptious breakfast sandwich. It really nails it. What do you think? Have you tried your hand at veganizing the breakfast sandwich before? If you try this recipe, share it! Comment below or tag Plenty Vegan on Instagram.

(Shout out to my friend, Myisha for this challenge – it was much needed. Check out her sex coaching work and incredible podcast Down For Whatever.)